Jason Whitlock was with Fox Sports and ESPN, he was with Outkick, he has written for Vibe and for Playboy, and frequently challenges liberal tropes about race and other issues, making him controversial to the tech powers that be. Which is probably why he got suspended for something totally normal on Twitter and other people doing the same normal thing were not suspended.

Remember that story this weekend that was literally everywhere except for any MSM news outlet for obvious reasons, in which it was revealed that the “Marxist” co-founder of Black Lives Matter was getting her wealth on?

It's also in this glowing write-up at a LUXURY real estate news website praising her and the property. Undeleted. Not suspended. https://t.co/Ckt6mrqCLw

(the shortlink in @WhitlockJason tweet goes to that same article, btw)

It’s a bogus excuse, just like the bogus one they used to suspend the New York Post.

There’s no notation on Whitlock’s account that it was suspended, anymore, because the tweet was deleted. Probably by Twitter or at their command. But the screenshot shows what happened.

I tried to make it a little easier to see: 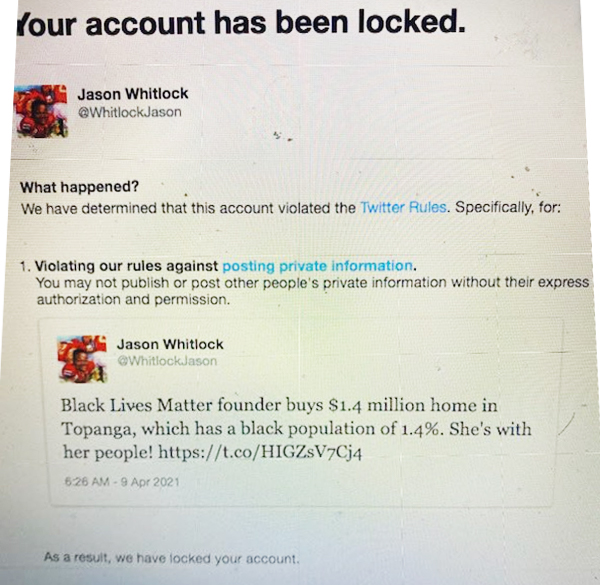 What’s going on here is obvious:

Exactly. It was negative about the BLM co-founder, so they punished his speech and purged him. It really is that simple.

BLM co-founder branded a fraud for blowing millions on a property empire, including a $1.4m home in a white suburb in Los Angeles. Patrisse Cullors identifies as a communist & advocates for a black Marxist revolution. She now owns 4 large houses in the US. https://t.co/NHDSwXYXDu