“This is weird,” wrote one user about the fake Twitter account that shared the viral video of dudes in khakis walking around in D.C. carrying flags and little shields, wearing masks, and being not feds.

Let’s mention right here at the start that a lot of OTHER people ALSO filmed these guys. They didn’t not exist. But it’s still really weird though. Take a look.

Some people were calling out the account even before the nuking.

Wait, wait, why then would you create the account with an AI-generated profile pic and a matching fake Facebook profile? Do you even love avocados? pic.twitter.com/PNEoDHM38O

Like I said, there were other people with video.

There are multiple actual journalists reporting on this event, but for some reason everyone is sharing this tweet from an account made last month with an AI-generated face pic as its avatar.

Before the account got suspended, it changed its identity. It went from identifying as a computer generated blonde gal to a masked dude in the Patriot Front fashion ensemble.

The @SherylLewellen account (ID 1464674954272776200) has now removed the GAN-generated profile pic and changed its display name to "Reclaim America – PatriotFront(dot)US".

A whole lot of big accounts took the bait on this one. #DontGetFooledAgain pic.twitter.com/v4opaRfVUo

. . . and now they're tweeting out a bunch of Patriot Front video content. pic.twitter.com/OKp3FA73T2

Eventually, the account claimed media coup on the whole thing. “This account was created with a fake name and AI generated profile in order to fool journalists into promoting Patriot Front’s demonstration in Washington D.C.,” it said. 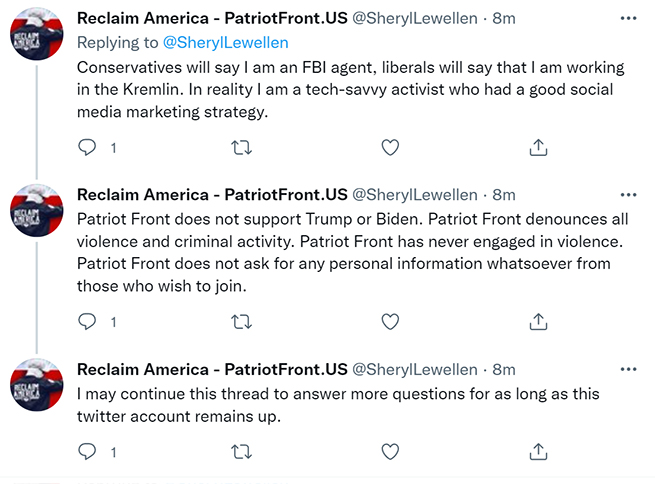 “Conservatives will say I am an FBI agent, liberals will say that I am working in the Kremlin. In reality I am a tech-savvy activist who had a good social media marketing strategy.”