It’s all so blatant now, and they don’t even have to worry about being caught. The media is all in a concerted effort, not acting as competitors for traffic or readers, not in an effort to do better work. If they are competing at all, it’s only in the contest of who can take their blatant dishonesty the furthest and still get away with it.

And don’t be confused, even though they are being called out right now, even though they got busted and had to make a “correction,” they got away with it. Ain’t no one in the media-democrat complex, especially not that fat dumb bald guy at CNN, going to have diddly to say about it. They’re fine with. Heck, they encourage it. 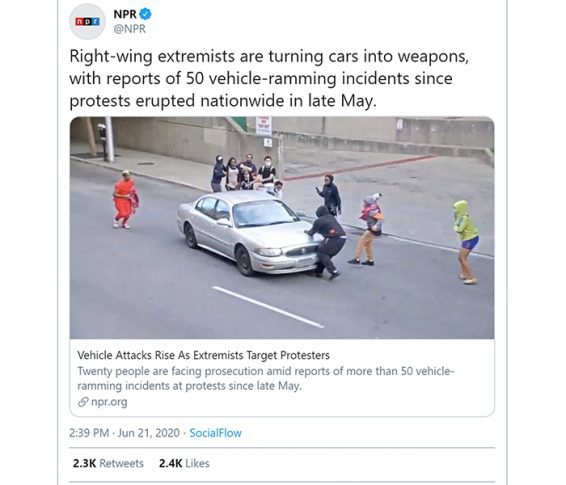 Well Tim Young knew they were blowing smoke and said so.

Here's a fuller video of what you're calling a "right-wing extremist attack" … a driver is harassed by a group of people, tries to get away, is then attacked by a larger group… and uses their vehicle to defend themselves and get away.

This story is leftist bullshit. pic.twitter.com/771gEebiqg

It’s not just the video of a driver in danger being harassed and attacked that shows the aggressor isn’t what NPR was claiming. No, the actual end result, as reported already by a local reporter, tells the same. Two people were charged in that incident. Two of the protesters.

And then, as it turns out, there’s video of a so-called “protester” pointing a GUN at the driver.

And here’s the video showing a “protester” pointing a gun at the driver. pic.twitter.com/w5gn4vUalB

So NPR fixes it. How? They delete the tweet and absolve themselves of guilt, changing nada about the story.

NPR then updates their story to include a photo from 2017, about riots and incidents in 2020. Just unbelievable. https://t.co/VseCxKNbGF

Our editors chose a photo that disproves our entire thesis and could get us sued for libel and defunded. Our apologies. https://t.co/N463dzhw6z

BUT THEY STILL EXPECT US TO TRUST THEIR NUMBERS AND CHARACTERIZATIONS ANYWAY.

Hi Hannah — you claim “at least 18 are categorized as deliberate attacks” & “two dozen are unclear as to motivation.” Can you provide your methodology? Your article used a photo where it was the ppl who attacked the car who were arrested — why doesn’t your article mention that? https://t.co/vKes85155O pic.twitter.com/ptdzFPXU0Z

Wait.. just thought of something. How do you know if the person in the car is “right wing?”

Maybe they saw what happened to Reginald Denny during the LA riots. they didn’t wanna be next.

Remind me why taxpayers fund you? https://t.co/Wcn0pbj3xj

But yeah, the REAL violence is theoretical right wingers trying to escape. Not the Black Lives Matter marxist rioters trying to kill them.