Ever since Gov. Ron DeSantis and Florida Republicans began fighting back against the Woke indoctrination of children, the so-called mainstream media has been at war with the state. Few things outside of Donald Trump himself so perfectly show the left’s utter control of the media narrative and the total in the tank for Democrats reporting by supposed press.

And those outlets and their Democrat allies have been pitching hissy fits galore about the rejection of woke Math textbooks, demanding to see what was so bad about.

Well guess what? Here you go. Straight from Florida’s Department of Education.

Based on the volume of requests the Department has received for examples of problematic elements of the recently reviewed instructional materials, the following are examples provided to the department by the public and presented no conflict in sharing them. These examples do not represent an exhaustive list of input received by the Department. The Department is continuing to give publishers the opportunity to remediate all deficiencies identified during the review to ensure the broadest selection of high quality instructional materials are available to the school districts and Florida’s students.

These are the samples:

Here’s one where students are literally doing a graph on how Republicans are racist. 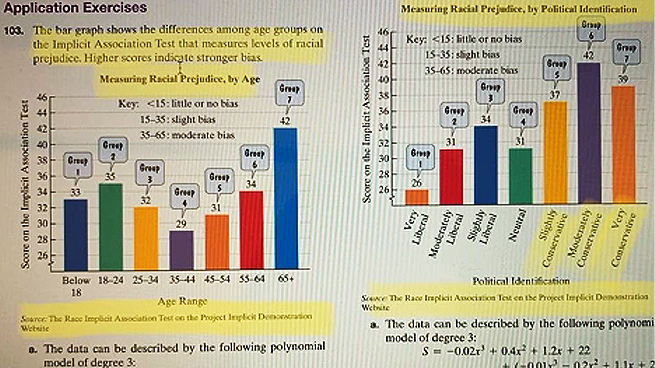 Keep in mind, these are MATH textbooks. And here’s a lesson about “social awareness” and “empathy.” Do those use Roman numerals, or what?

There is no way you’d know this one is from a math textbook if we weren’t telling you that:

And the coup de grace: “What, me racist?” This one is just … wow. “Differences among groups by age, and by political identification, are intriguing.”

Note the extra commas. For this math book they consulted woke-ologists but apparently not English majors. 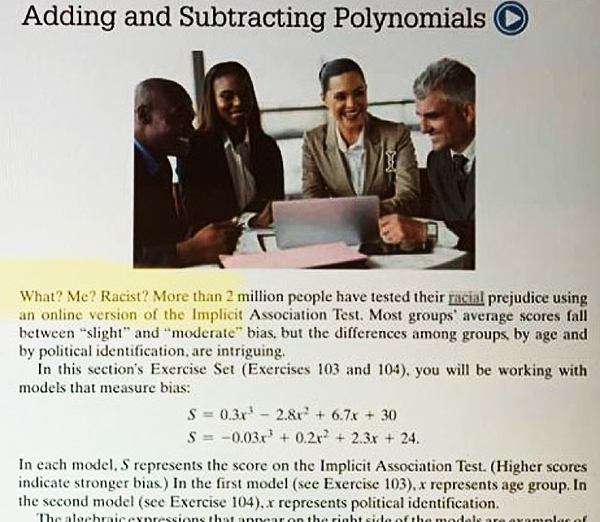 Since the moment the textbooks were rejected, there’s been an organized spam campaign on social media of blue checks and bots alike repeating hundreds of variations on “Where’s the proof” or “Where’s the examples?” – usually tagging Gov. DeSantis. Plenty of RINO and NeverTrumps got in on that act, but most likely by emulation. I’m sure they weren’t invited to the planning meeting.

But for all of them, here’s your answer. Now eat it.